“Where there is no vision, the people perish: but he that keepeth the law, happy is he. (Verse 18)” Do you have a vision for your future? Is it aligned with God’s will for your destiny? As the year draws to an end, it’s the perfect time to step back and take a look at our lives. Don’t spend it beating yourself up. I didn’t lose as much weight as I wanted (even gained a little back since my move), but I still lost about 50 pounds. Reassess where you are now and where you want to be this time next year. Form a plan to make it happen. Don’t get discouraged along the way if it doesn’t happen as fast or exactly according to plan, God’s ways and timing are different than ours. The important thing is not to lose sight of the vision God gives you. If you don’t know what that vision is after reassessing the year, ask God. Talk to Him, He wants that one on one relationship with you. You aren’t going to find a fulfilling happiness until your vision aligns with His. 💛 ~ Chelle, #f8ithgal 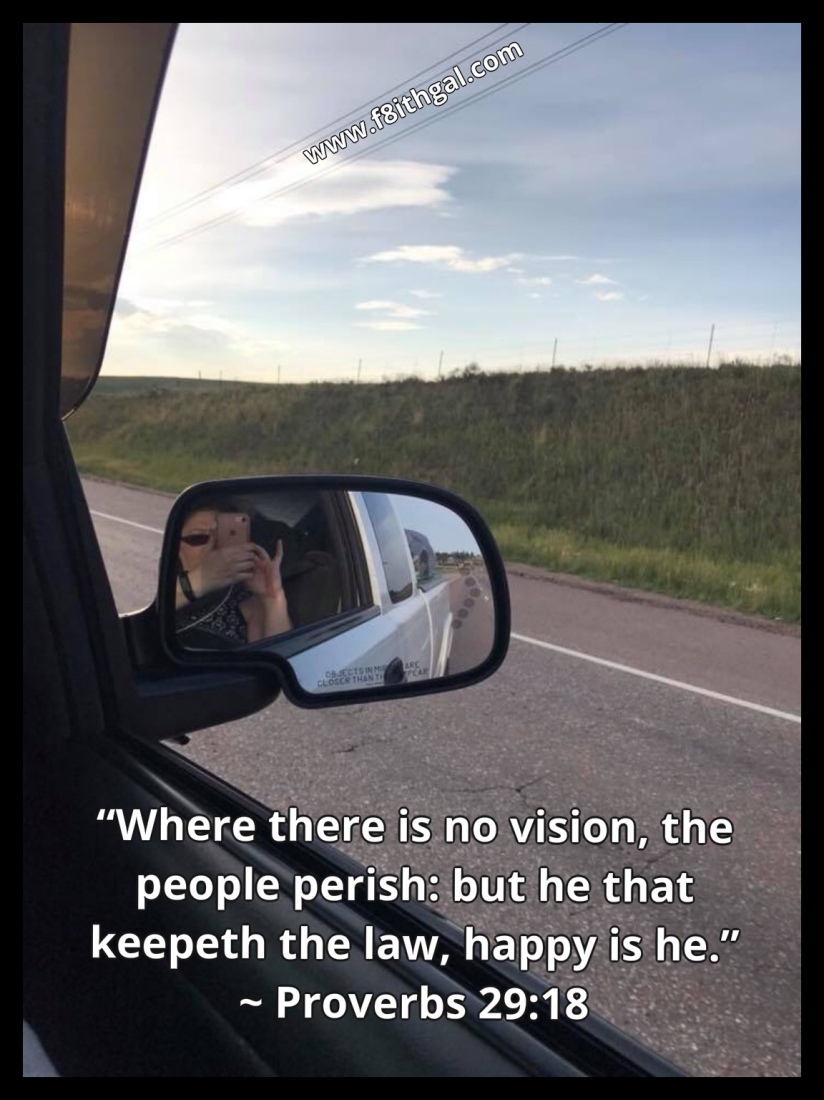 1 He, that being often reproved hardeneth his neck, shall suddenly be destroyed, and that without remedy.

2 When the righteous are in authority, the people rejoice: but when the wicked beareth rule, the people mourn.

3 Whoso loveth wisdom rejoiceth his father: but he that keepeth company with harlots spendeth his substance.

4 The king by judgment establisheth the land: but he that receiveth gifts overthroweth it.

5 A man that flattereth his neighbour spreadeth a net for his feet.

6 In the transgression of an evil man there is a snare: but the righteous doth sing and rejoice.

7 The righteous considereth the cause of the poor: but the wicked regardeth not to know it.

8 Scornful men bring a city into a snare: but wise men turn away wrath.

9 If a wise man contendeth with a foolish man, whether he rage or laugh, there is no rest.

10 The bloodthirsty hate the upright: but the just seek his soul.

11 A fool uttereth all his mind: but a wise man keepeth it in till afterwards.

12 If a ruler hearken to lies, all his servants are wicked.

13 The poor and the deceitful man meet together: the Lord lighteneth both their eyes.

14 The king that faithfully judgeth the poor, his throne shall be established for ever.

15 The rod and reproof give wisdom: but a child left to himself bringeth his mother to shame.

16 When the wicked are multiplied, transgression increaseth: but the righteous shall see their fall.

18 Where there is no vision, the people perish: but he that keepeth the law, happy is he.

19 A servant will not be corrected by words: for though he understand he will not answer.

20 Seest thou a man that is hasty in his words? there is more hope of a fool than of him.

21 He that delicately bringeth up his servant from a child shall have him become his son at the length.

22 An angry man stirreth up strife, and a furious man aboundeth in transgression.

23 A man’s pride shall bring him low: but honour shall uphold the humble in spirit.

24 Whoso is partner with a thief hateth his own soul: he heareth cursing, and bewrayeth it not.

25 The fear of man bringeth a snare: but whoso putteth his trust in the Lord shall be safe.

26 Many seek the ruler’s favour; but every man’s judgment cometh from the Lord.

Just a gal trying to make it through the day with a strong f8ith in God and a love for music. I write from the heart and I'm f8ithful to a fault- that's me f8ithgal! View all posts by f8ithgal